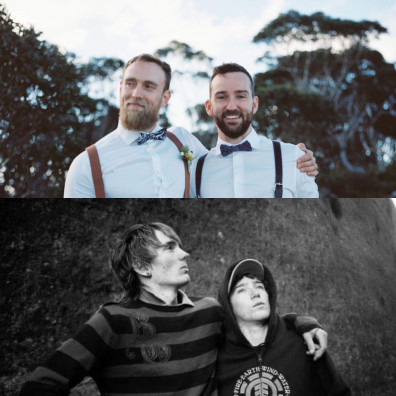 The boys, Shorty (Trent) and Paul are super excited to announce that they’re taking part in Shitbox Rally 2023 Summer!! This year, all the teams are driving their shitboxes from Rockhampton to Hobart.

Shorty and Paul have known each other since the innocent age of three, and have been best buds since they can remember.

In what some would call their prime, they joined a high school band that was destined to take the world by storm. That band was Falling From First.

Obviously that ended shortly after it begun, however, they are bringing back the iconic name to immortalise it in Shitbox Rally History!

Shitbox Rally is the largest community lead fundraiser for the Cancer Council in Australia, and to participate, we need to raise a minimum of $5000.

In August 2003, when Paul was 13, he lost his father Colin to melanoma, leaving a massive hole in his family.

Melanoma is an ugly cancer, yet in the almost two decades since his death, the world has made pretty great strides in treating it, and that is in part thanks to organisations like Cancer Council.

Unfortunately, there are too many others who share a pretty similar story, but hopefully in the future it won’t have to be that way any more!

The fundraising is the hard part, so any donation you can give is greatly appreciated (and it’s tax time soon, so don’t forgot you can claim it!)Please make sure to follow their progress via this page and if you’re selling a shit box, hit them up!

Shitbox Rally is the adventure of a lifetime challenging participants and their cars, worth no more than $1,500, over a 7 day across Australia endeavour to raise money for cancer research.

The rally is not a race – it’s a fun, colourful, unpredictable adventure with participants travelling at their own pace in smaller groups. Vehicles often break down but “we never leave anyone behind” and each night is spent camping beneath the stars and celebrating the day’s achievements. It all adds up to an incredible opportunity to see Australia’s vast and beautiful countryside and make lifelong friends, many brought together after experiencing cancer themselves or seeing cancer impact family and friends.

Since it’s inception the rally has been the largest fundraiser for the Cancer Council nationally.

Shitbox Rally is a dedicated fundraising event for cancer research with funds going to Cancer Council.

Cancer Council is one of the largest non-government funders of cancer research in Australia. We conduct and fund research studies across all cancers and all stages of the cancer journey.

Thanks to the community funds raised such as Shitbox Rally we can fund world-class research that reduces the impact of cancer for everyone.

More than $30 million over the past 12 years has been raised by Box Rallies to date, supporting ground-breaking projects such as:

These projects wouldn’t be possible without your support.